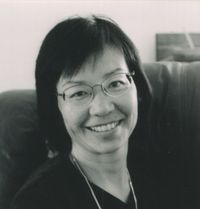 Arlene Chan (Chinese: 陳林瑞玲; born in Toronto, Ontario; third generation Chinese Canadian) is a writer and retired librarian. Chan has published non-fiction works for children, young adults, and adults on Chinese festivals, dragon boat racing, and the Chinese in Canada. Her seventh book, which is about the head tax and Chinese Exclusion Act, was published in 2014.

An avid dragon boater and gold-medalist member of the Canadian National Women’s Dragon Boat Team, she lives, writes, and paddles in Toronto. She is the daughter of Jean Lumb, the first Chinese Canadian woman to receive the Order of Canada.

Chan is the president of the Jean Lumb Foundation that supports a scholarship program for high school students of Chinese heritage, director of Little Pear Garden Collective, and member of the Ontario Medal for Young Volunteers Advisory Council. She received the Queen Elizabeth II Diamond Jubilee Award in 2013.

"Against All Odds: The Chinese Laundry" in The Ward, edited by John Lorinc et al. Toronto: Coach House, 2015.

The Chinese Community in Toronto: Then and Now. Toronto: Dundurn Press, 2013.

The Chinese in Toronto from 1878: From Outside to Inside the Circle. Toronto: Dundurn Press, 2011. Nominated for the 2012 Heritage Toronto Award and 2013 Ontario Speaker’s Award.

The Spirit of the Dragon: The Story of Jean Lumb, A Proud Chinese Canadian. Toronto: Umbrella Press, 1997. Selected as a Choice Book by the Canadian Children’s Book Centre.