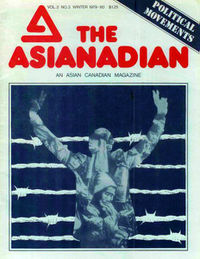 The Asianadian: An Asian Canadian Magazine (1978-1985) was and remains the only Asian Canadian serial that was overtly anti-racist, anti-sexist, and anti-homophobic while maintaining a decidedly cultural aspect with poetry, prose, book reviews, crossword puzzles, Dubious Award (to the most obvious Asian Canadian stereotypes), and cartoons.

The Asianadian was published from 1978 to 1985 with 24 issues. It was founded by Tony Chan, Cheuk Kwan, and Lau Bo (aka Paul S. Levine) at a Mars Cafe lunch on College Avenue in Toronto Canada.

There was also an interview with Chinese American director Wang Wang immediately after his seminal film, Chan is Missing. Wang later directed Joy Luck Club and Smoke with Harvey Keitel.

"Wayne Wang’s Interview with The Asianadian" [1]

"Since the demise of The Asianadian magazine... there has been no national forum for discussing cultural or political issues for a pan-Asian audience." Richard Fung in Li, Voices Rising, 2007, p. 29

"I went to the library and found those back issues of The Asianadian. It was great because some of the people who wrote for the magazine later became professional writers- pretty established names like Richard Fung and Joy Kogawa." Kyo Maclear in Li, Voices Rising, 2007, p. 209.