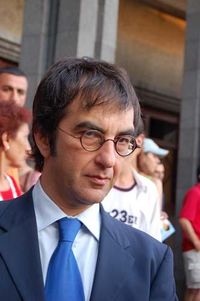 Atom Egoyan, OC (Born July 19, 1960) is a critically acclaimed Canadian stage director and film director. Egoyan made his career breakthrough with Exotica (1994). His most critically acclaimed film is The Sweet Hereafter (1997), and his biggest commercial success is Chloe (2009).

His work often explores themes of alienation and isolation, featuring characters whose interactions are mediated through technology, bureaucracy or other power structures. Egoyan's films often follow non-linear plot-structures, in which events are placed out of sequence in order to elicit specific emotional reactions from the audience by withholding key information.