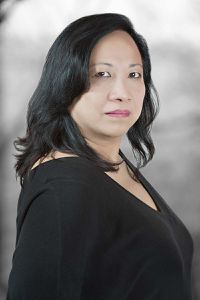 Carolyn Fe was born to a family of entrepreneurs, whose enterprising spirit has clearly influenced her. Moving to Canada at a time before cultural diversity was ‘de rigueur’ and being the only Asian family in a predominantly white, Francophone neighborhood, Carolyn learned to negotiate from the sidelines at an early age and it has been her strength ever since.

She was a professional contemporary dancer touring, choreographing for her own professional dance company and was commissioned to choreograph for various dance companies locally and internationally until her mid-twenties. She even owned and operated a dance school offering classical ballet, tap, jazz and aerobics classes to hopeful dancers of all ages. When it was time to leave that, Carolyn entered the corporate realm where she is an accredited professional with her own consulting firm, CFT Inc.

As a professional actor, Carolyn has been gracing the stage and camera in various theatrical productions, TV and movie spots. Altera Vitae Productions is her own theatre production company, where each theatrical presentation is partnered with a community organization whose mandate is similar to the theme of the play. Altera Vitae Productions aims to assist community organizations with their public awareness programs.

As a singer, Carolyn co-founded the band DD Swank and, for four years, fronted for them under the pseudonym of Mama B, singing in French, English and Spanish. However, the urge to go on her own was tugging strongly at her heartstrings.

Carolyn continues to push the envelope and stretch her artistic talents into a singing/songwriting career with her band, Carolyn Fe Blues Collective. Within weeks of the release of their EP entitled "100%", this independent blues band's songs immediately joined the play lists of various online and on-air radio stations. They continue to receive positive feedback as the songs remain alive at worldwide. The band continues to establish its presence in the Montreal Blues scene, having launched their first full-length CD entitled "Original Sin" to packed houses on two nights at Montreal's Blues Institution "Le Bisto a Jojo" on August 2011 with the result being the winner of Quebec's Lys Bleus 2012 for Best Blues Album & Associated Styles, Quebec Lys Bleus Nominee for Best Female Artist of 2012, and Nominee for Best International Release by Blues 411(USA).

Their 2nd full length album, Bad Taboo, released in May 2014 spread like wildfire receiving international air play, more nominations and awards including The Jimi Award (USA) for Best International Release and placing #8 on the Blind Lemon Top 20 Canadian Blues Album of the Year! The album includes a collaboration with Shun Kikuta (Queen of the Blues Koko Taylor's former guitarist) on the title track. As well, Maple Blues Award winner: Guy Belanger adds his harmonica on two tracks of the album.

A highly versatile, well-rounded performer, Carolyn possesses the deep soul of an artist who has lived on the fringe for most of her life, and made the most of it as the true innovator she is, giving her music and lyrics an insight and depth that cannot be imitated and must be heard. She continues on with other artistic projects in theatre, film, TV; all the while solidifying her footing in the music industry.