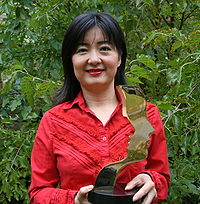 As a multi award-winning filmmaker, Diana's outstanding work is a result of her rich international experiences within the media field, and her deep understanding of human nature. Her visionary film-making expertise has gained her various acclaimed documentaries with CBC and VisionTV. She received the prestigious Gemini Award in 2009 and the Golden Sheaf award in 2010 for her role as producer for the CBC documentary "China’s Earthquake, The people in the pictures".

Diana Dai was born in China. She is truly a citizen of the world and her prized possession is her passport stamped with souvenirs reflective of all her wonderful adventures. She obtained her first degree in literature in China. In 1991, she left to go to the United Kingdom where she obtained a Master's degree in Communication Studies at the University of Leeds. She worked as an editor for a bilingual magazine Siyu Chinese Times, and taught Chinese at the University of Leeds. She was also on the editorial board of "Journal of Macro Linguistics".

She emigrated to Canada in 1996 as an independent professional. She was one of the founders for the Mandarin program for OMNI TV and was its host/ producer from 1996 to 2007. She has made several appearances on CBC Radio and Sun TV, and has been a guest speaker at the University of Toronto, Queens University and University of Ontario Institute of Technology conferences. She served as the "Master of Ceremony" (both in Chinese and English) for many community events.

Diana Dai also has the spirit of an entrepreneur; she organized the concert of the Canadian “True North Brass” band to China in 1999 that was a huge success. She started her own communication company to produce documentaries in 2009. With her deep understanding of both Western and Eastern cultures, she is building a bridge to minimize the cultural gap.