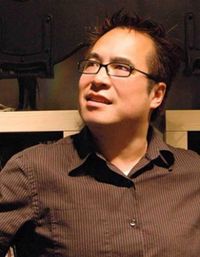 At 50 years of age, Donald Quan has been composing professionally most of his life. He has been nominated for several Gemini Awards and has been the recipient of 3 SOCAN awards for film music as well as multiple Canadian Aboriginal Music Awards.

Donald Quan [1] [2] is a renowned multi-instrumentalist and has toured all over the world with Loreena McKennitt [3] playing tabla, viola and keyboards. He was also a member of Lighthouse [4] for many years and was the audio producer of Lighthouse's "40 years of Sunny Days" DVD/CD. He has toured in Asia with Erhu virtuoso George Gao [5] and world music flutist Ron Korb [6] as well as with contemporary Kirtan artist Jim Gelcer. [7]

Donald is best known for his memorable theme for the syndicated series "Relic Hunter".[8] In fact, he was the only creative that was with the series for all 66 episodes.

He has scored hundreds of hours of dramatic series, documentary, short and feature films and CBC radio-dramas.

Amongst his other dramatic series credits are 44 episodes of "Mutant X" http://www.imdb.com/title/tt0283203/] and 22 episodes of "Starhunter" [9] (Alliance/Atlantis) and others too numerous to mention.

As a recording artist, Donald Quan has released 3 albums on his independent label Edam Squid [14] and has recently released over a dozen albums as a label artist for Somerset/Avalon Entertainment.

Donald is one of the most prolific SOCAN-earning film composers in Canada.

Currently Donald runs and performs at the renowned Musideum,[15] a museum of unusual musical instruments and nightly venue to some of the best musical performances in Toronto.