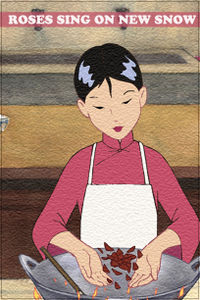 [edit] Films (about or by Chinese Canadians)

Chinese Cafes in Rural Saskatchewan, Chan, Tony, director. 1985. This is the original Chinese "cafe" film with "Noisy" Jimmy Kook of Outlook Saskatchewan. A film profile of four Chinese cafe owners and their families living and flourishing in Outlook, Humboldt, and Eston, Saskatchewan. It looks at the role of women and sexism, historical and contemporary racism, business acumen, civic spirit and neighborhood relations. Includes a segment on Wayne Mah, the prairie’s only Chinese Canadian mayor in 1985. Rare still photos of early Chinese in Canada. [3]

Chinese Restaurants, Cheuk Kwan director. This set of films explores the lives and stories of families in many countries who own Chinese restaurants. Disc 3 includes a Canadian story, that of Jim Cook who ran the New Outlook Café in Saskatchewan for 40 years.

Comrade Dad, Karen Lee, director. Karen Lee tells the story of her father Wally Lee and the communist bookstore that he ran on Vancouver's Skid Row from the mid-1960s to the early 1980s.

"Cedar and Bamboo." Cedar and Bamboo. Chinese people arrived on the Western shores of Canada many generations ago. Since then, they have formed unique relations and shared many experiences with this land's indigenous people. Cedar and Bamboo explores those relationships through the lives of four people of Chinese and Aboriginal roots. Set in the stunning land of British Columbia and the bustling multicultural city of Vancouver, their stories reveal the difficult circumstances of aboriginal people and early Chinese immigrants that both led to these unions but also challenged these families to stay as a whole.

The Chan Legacy, CBC Learning This episode of CBC's "Generations" series profiles the Chan family, whose Canadian roots go back seven generations, beginning with the Reverend Chan Yu Tan and his wife who came to Canada in 1896 to "spread the gospel."

I am the Canadian Delegate, Lowe, Wesley, director. A documentary film about Douglas Jung (1924-2002), a World War II veteran and the first Chinese Canadian member of the House of Commons.

In the Shadow of Gold Mountain, Karen Cho, Karen, director. Karen Cho, a fifth-generation Canadian of mixed heritage travels from Montreal to Vancouver to gather the testimonials of the last living survivors of the notorious Chinese Head Tax and Chinese Immigration Act.

The Panama, Chan, Tony Chan, director. The Panama (1996) is a documentary film chronicling the Chan family of Victoria, B.C. One of the oldest Chinese families in Victoria, they owned and operated several restaurants, ending with the Panama Cafe on Government Street from around 1930 until 1967. Chan Dun, at the age of seventeen, landed in Victoria in the 1893, and his family of eight sons and four daughters lived & worked at the Panama Cafe, a western-style eatery catering to the working class of the city. It survived the depression and the war years (even when several sons left for military service). But in the 1960s when fast-food competition in the city became too great, they closed their doors. The film includes many rare black and white photos of early Victoria. [4]

Return Home, Michele Wong, director. A first-generation Chinese-Canadian filmmaker, Michelle Wong, visits her aged grandparents in St. Paul, Alberta, journeying with them into the past to document their lives.

Under the Willow Tree: Pioneer Chinese Women in Canada, Dora Nipp, director. Recollections of seven Chinese women who grew up in Canada in the first half of the 20th century.

Wayson Choy: Unfolding the Butterfly (Secrets & Memories), Glassbourg, Michael, director. A documentary about the life of writer and activist Wayson Choy. Choy recalls his childhood in Vancouver's Chinatown and reads from his autobiography Paper Shadows and novel, The Jade Peony.