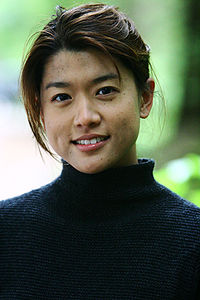 Grace Park (born March 14, 1974) is an American-born Canadian actress. She is best known as Sharon Valerii (and the various other iterations of Number Eight, a humanoid Cylon) on Battlestar Galactica, as well as Shannon Ng in the Canadian television series teen soap Edgemont. Park was co-starring in A&E's The Cleaner until it was cancelled September 25, 2009 and currently stars in the CBC's The Border in Canada. Park will play detective Kona Kalakaua in CBS' remake of Hawaii Five-O , which will debut in the fall of 2010.

Born in Los Angeles, California, Park and her family moved to Canada when she was 22 months old. She was raised in the Vancouver neighbourhood of Kerrisdale. Grace Park graduated from Magee Secondary in 1992 and holds a degree in psychology from the University of British Columbia. Park understands some Korean and is currently studying Spanish. As of 2004, Park lives in Vancouver with her husband, Phil Kim. She was named #93 in Maxim Online's 2006 Hot 100 List and named #81 on the Maxim magazine "Hot 100 of 2005" list.

Park has a role in the 2007 movie West 32nd, a crime drama dealing with New York City’s Korean underworld.

In 2008, she had co-starring roles in the A&E series The Cleaner and the CBC series The Border. In 2009, Park had an uncredited cameo role on the television show CSI: Crime Scene Investigation. She appeared as a fan in a crowd at a science fiction convention, objecting to a gritty remake of a Star Trek-like series, comparable to the Battlestar Galactica remake in which she starred. In 2009 she reprised her role as Sharon aka cylon Number Eight from Battlestar Galactica in the television movie Battlestar Galactica: The Plan. It told the series story from the cylons' point of view. In 2010, she appeared in Fox series Human Target as Eva Kahn.