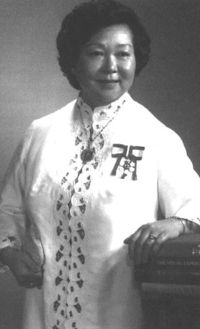 Jean Bessie Lumb, CM (1919–2002) was the first Chinese Canadian woman and the first restaurateur to receive the Order of Canada for her community work. Most notably, she was recognized for her pivotal role in changing Canada’s immigration laws that separated Chinese families and for her contribution in saving Chinatowns in Toronto and other cities.

Lumb, one of twelve children, was born in Nanaimo, B.C. to Fun Gee Wong and Hone Hung Mah, both of Canton, China. Her father emigrated to Canada to work as a farm labourer. Lumb left school at the age of 12 to work and support her family. In 1935, she moved to Toronto and later opened her own grocery store as a 17-year-old. In 1939, she married Doyle Jenning Lumb, her husband of 50 years. The mother of six children and grandmother of nine grandchildren, Jean Lumb was the Co-Owner and Director of the Kwong Chow Restaurant in Toronto for 23 years. Jean Lumb was very active in community work throughout her life. She achieved many firsts in Toronto. First Chinese woman on the board of governors of the Women’s College Hospital. First Chinese woman on the board of University Settlement House. First Chinese restaurateur and first woman to receive the Fran Deck Award for outstanding achievement in Toronto’s restaurant industry. First Chinese-Canadian woman to sit on the Board of Rotary-Laughlen Centre. She served as Director and Honorary Advisor of the Yee Hong Chinese Nursing Home for Greater Toronto and the Chinese Cultural Centre of Greater Toronto, respectively.