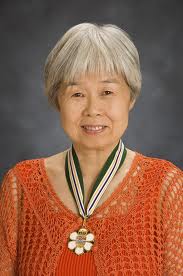 "Joy Kogawa was born in Vancouver in 1935 to Japanese-Canadian parents. During WWII, Kogawa and her family were forced to move to Slocan, British Columbia, an injustice Kogawa addresses in her 1981 novel, Obasan. Kogawa has worked to educate Canadians about the history of Japanese internment camps, and she has been active in the fight for official governmental redress. Kogawa studied at the University of Alberta, the University of Toronto, and the University of Saskatchewan. Her most recent poetic publication, the beautifully illustrated A Song of Lilith, explores the character of Lilith, the mythical first partner to Adam."[1]