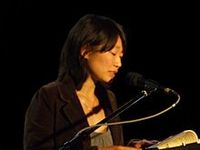 Thien was born the same year her parents immigrated to Vancouver from Malaysia. She is the daughter of a Chinese Malaysian father and a mother originally from Hong Kong, and her older brother and sister were born in Malaysia. Madeleine Thien (born 1974) is a Canadian) short story writer and novelist. Born in Vancouver, British Columbia), she was educated at Simon Fraser University) and the University of British Columbia).

Thien has lived in various locations - Vancouver, the Netherlands, Québec City, Montréal, and Berlin. At the age of 20 she began to travel throughout Southeast Asia where she met members of her extended family and researched her novels. She continues to travel often, and her fiction reflects on how times and places intersect in people's lives.

In 2001 she was awarded the Canadian Authors Association Air Canada Award for most promising Canadian writer under age 30. In 2008, she was invited to participate in the International Writing Program at the University of Iowa.

Thien's first book, Simple Recipes (2001), a collection of short stories, received the City of Vancouver Book Award, the VanCity Book Prize and the Ethel Wilson Fiction Prize. Her novel, Certainty (2006), has been published internationally and translated into 16 languages. It won the Amazon.ca/Books in Canada First Novel Award, the Ovid Festival Prize and was a finalist for the Kiriyama Prize for Fiction. Her fourth book, a novel entitled Dogs at the Perimeter, was published by McClelland & Stewart in May, 2011 and was a finalist for the Hugh MacLennan Prize for Fiction. The novel was subsequently published by Granta Books in 2012 and translated in 8 languages.

This article based on content from http://www.wikipedia.org. Original version: http://en.wikipedia.org/wiki/Madeleine_Thien

This article based on content from http://www.thecanadianencyclopedia.com/articles/madeleine-thien.
Retrieved from "https://www.asiancanadianwiki.org/mw/index.php?title=Madeleine_Thien&oldid=16497"
Categories: