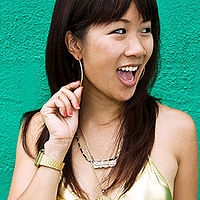 Masia One (born April 5, 1982) is a Canadian female rapper from Toronto, Ontario, Canada.

She was born in Singapore and moved to Canada at a very young age. She grew up in Vancouver and eventually moved to Toronto. She went to University of Toronto and graduated with a degree in Architecture with a minor in Economics. In 2003, she began her own record label known as M1 Group (later renamed The MERDEKA Group) and subsequently released her debut album Mississauga. Her most famous songs are Split Second Time, Halfway Through the City, and Return of the B-Girl. In 2003, Masia One became the first female rapper to be nominated for "Best Rap Video" in the MuchMusic Video Awards.

In 2009, Masia One joined the label Kops N Robbers completing an album with Aftermath producer Che Vicious. She will be releasing her first mainstream American debut in Summer 2010 featuring some of the biggest names in Hiphop.