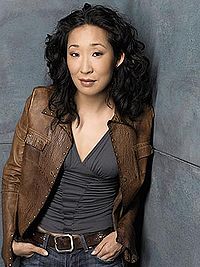 Sandra Oh is a Canadian actress. She is primarily known for her role as Dr. Cristina Yang in the ABC series Grey's Anatomy, for which she has won a Golden Globe award. She also played notable roles in the feature films Under the Tuscan Sun and Sideways, and had a supporting role on the HBO original series Arli$$.

Oh was born in the Ottawa suburb of Nepean, to middle-class Korean immigrant parents Joon-Soo (John) and Young-Nam, who had come to Canada in the early 1960s. Her father is a businessman and her mother a biochemist. Oh grew up living on Camwood Crescent in the Ottawa suburb of Nepean, where she began acting and dancing ballet at an early age. At the age of 10, she played The Wizard of Woe in a class musical, The Canada Goose.

This interest led her to take drama classes, act in school plays, and join the drama club where she took part in the Canadian Improv Games and Skit Row High, a comedy group. Against her parents' advice, she rejected a four-year journalism scholarship to Carleton University to study drama at the prestigious National Theatre School of Canada in Montreal, paying her own way. She told her parents that she would try acting for a few years, and if that failed, return to school. Curiously, while studying at the National Theatre School, she portrayed a waitress in the made-for-television film, School's Out, in which her co-worker, Caitlin Ryan (Stacie Mistysyn) also considers turning down her acceptance into Carleton University's journalism program.

Soon after graduating from the National Theatre School in 1993, she starred in a London, Ontario stage production of David Mamet's Oleanna. Around the same time, she won roles in biographical TV films of two significant female Chinese-Canadians: as Vancouver author Evelyn Lau in The Diary of Evelyn Lau (Oh won the role over more than 1,000 others who auditioned); and as Adrienne Clarkson in a CBC biopic of Clarkson's life.