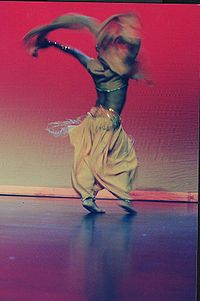 Shakti was born in 1957 in Kyoto, Japan to an Indian father and a Japanese mother. Her mother founded the VasantaMala Dance Company and was the first Japanese woman to introduce Indian dance into Japan. Her father was a professor of English at the Kyoto University of Foreign Studies and was also the founder and director of the Gandhi Institute in Kyoto.

SHAKTI ｇrew up with not only the rich cultural heritage of Japan but of India as well. She studied yoga with her father and dance with her mother and with the foremost gurus of India.

She is the coordinator of the Japan Experience which assists and manages Japanese artists abroad. The Scotsman said "The greatest step for Asian Art in Edinburgh!" Shakti is also the artistic director of The Garage International which is now one of the most prominent venues in the Edinburgh Festival Fringe hosting over 40 different companies from all over the world. The Garage International has now expanded into Avignon (France) and Adelaide (Australia) and Montreal (Canada).