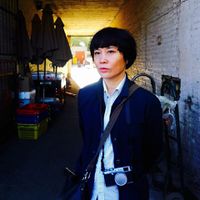 Sook-Yin Lee is a Canadian broadcaster, musician, filmmaker, and actress. She is a former MuchMusic VJ, and, since 2002, has been a host on CBC Radio.

In 1995, Lee became a VJ for MuchMusic, bringing her theatrical and musical background and her unique creative perspective to the channel. She was best known as the host of MuchMusic's alternative music show, The Wedge.

Lee is openly bisexual.[7] In 1995, on the day that sexual orientation was held to be protected under s. 15 of the Canadian Charter of Rights and Freedoms by the Supreme Court of Canada in the Egan v Canada case, Lee celebrated the decision by kissing a woman on the air.[9] She later appeared on the cover of Xtra! in 1997.

She left MuchMusic in 2001. During her last appearance as a MuchMusic VJ, Lee and her co-host turned their backs to the camera, and mooned the audience on live television.[10]

The following year, she was named as the new host of CBC Radio One's Saturday afternoon pop culture magazine Definitely Not the Opera.

In the fall of 2004, she produced and hosted a documentary celebrating Terry Fox as part of the CBC Television series The Greatest Canadian. Fox finished second in the voting to Tommy Douglas, whose advocate was another ex-MuchMusic VJ, George Stroumboulopoulos.

DNTO completed its run in 2016. Lee immediately hosted the summer series Sleepover for CBC Radio,[11] and remains in talks to develop another permanent program for the network.