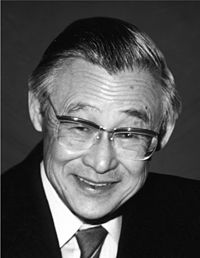 Thomas K. Shoyama was born in Kamloops, and graduated from the University of British Columbia with BA and BComm degrees in 1938. From 1939–45, “Tommy” served as editor of the New Canadian, a weekly civil rights newspaper, which he continued to publish from an internment camp in Kaslo, BC. In 1946, after a brief stint in the Canadian Army Intelligence Corps, he was encouraged to join the government of Saskatchewan by George Tamaki, an old university friend and fellow Japanese-Canadian. Working for George Cadbury and T.H. McLeod, Shoyama was hired as a research economist within the newly established Economic and Planning Board (EAPB). His first tasks included working on a new system of public hospital insurance, developing a system for administering diverse Crown Corporations, and working out an economic development plan based on the province’s undeveloped natural resources. In 1950, he became Cabinet’s chief economic advisor, secretary to the EAPB, and T.C. Douglas’ closest policy advisor. Shortly after the election of 1964, Shoyama became a senior research economist with the newly established Economic Council of Canada. In 1968, he became Assistant Deputy Minister of Finance, and by 1975, after a brief term as Deputy Minister of Energy, Mines and Resources, he was appointed Deputy Minister of Finance.

During these years in Ottawa, Shoyama was recognized as one of the most senior members of the “Saskatchewan Mafia.” Retiring in 1979, Shoyama moved to Victoria, where he joined the public administration faculty at the University of Victoria.

Shoyama’s profound and abiding commitment to public service was recognized through several national awards, including Officer of the Order of Canada (1978), the Outstanding Achievement Award in the Public Service of Canada (1978) and the Vanier Medal in Public Administration (1982). In 1992, the government of Japan awarded Mr. Shoyama the Order of the Sacred Treasure in recognition of his many contributions to the Japanese-Canadian community. Shoyama died in December, 2006.